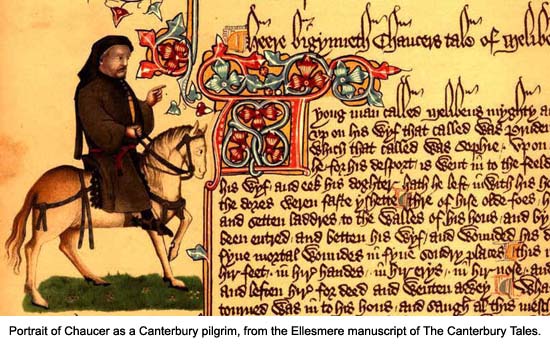 From The Short Oxford History of English Literature, by Andrew Sanders.

Despite the manifest political and social disruptions of his age, Geoffrey Chaucer's poetry both expresses and embodies a firm sense of order. This is true as much of his twin masterpieces, Troilus and Criseyde (probably written in the mid-1380s) and The Canterbury Tales (planned c.1387), as of his more modestly conceived 'minor' poems and surviving prose works. This sense of order is evident not simply in his reflections on the nature and workings of the cosmos (such as his prose treatise on the use of the astrolabe, written to instruct his little son Lewis) and in his frequent allusions to Boethius's highly esteemed disquisition De consolatione philosophiae (which Chaucer himself translated into English prose in c.1380) but also in his steady affirmations of an orthodox Christian belief in divine involvement in human affairs. In Troilus and Criseyde, at the end of his evocation of incidents supposed to have taken place at the time of the Trojan War, Chaucer turns from his account of 'payens corsed olde rytes' ('the accursed old rites of the pagans') to a vision of Troilus translated from this world to the next and able to laugh serenely at the woe of those who mourn his death. If tragedy is here transformed into a divine comedy, so the 'olde rytes' are effectively blotted out in the pious concluding address to the Holy Trinity. This exultant prayer, in part derived from Dante, sees the Triune God as reigning eternally over all things and setting his mystical seal on human aspiration.
Chaucer (c.1343-1400), in common with most of his European contemporaries, also recognized that the natural and the human worlds could be seen as interrelated in the divine scheme of things, and, like the kingdom of heaven, ordered in hierarchies. In the witty, elegantly formed The Parlement of Foulys, written, it has been argued, to compliment the marriage of King Richard II to Anne of Bohemia in 1382, he presents a vision of birds assembled on St Valentine's Day in order to choose their proper mates. The birds have gathered before the goddess of Nature, and, in accordance with 'natural' law, they pay court, dipute, and pair off in a strictly stratified way. The royal eagles, seated in the highest places, take precedence, followed in descending order by other birds of prey until we reach the humblest and smallest seed-eaters. The debate in this avian parliament about how properly to secure a mate may remain unresolved, but it is clear that the nobler the bird the more formal are the rituals of courtship accorded to it. Ducks may prove pragmatic when snubbed by particular drakes ('"Ye queck [quack]!" yit seyde the doke, ful well and feyre, / "There been no sterres [stars], God wot, than a payre!"') but eagles seek for higher things in defining and exploring love and look down on such churlish common sense ('"Thy kynde is of so low a wrechednesse / That what love is, thow canst nat seen ne gesse"'). 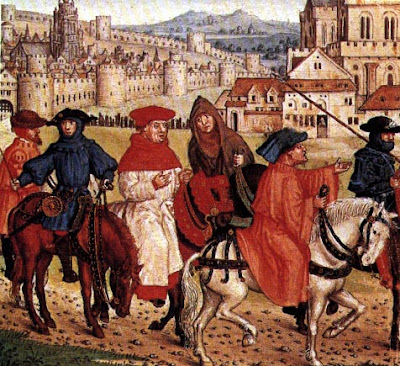 The question of degree, and of the social perceptions conditioned by rank, also determines the human world that Chaucer variously delineates in The Canterbury Tales. The General Prologue, which sets out the circumstances which bring the pilgrims together at the Tabard Inn before they set off for Canterbury to pray at the tomb of the martyred St Thomas Becket, also presents them to us, as far as it is feasible, according to their estate ('Me thynketh it accordaunt to resoun / To telle yow al the condicioun / Of ech of hem, so as it semed me, / And whiche they weren, and of what degree'). The Knight is naturally placed first, followed by his son the Squire, and by his attendant Yeoman. The Knight is duly succeeded by representatives of the Church: the fastidious Prioress with an accompanying Nun, personal chaplain, and three other priests; the Monk who holds the office of outrider in his monastery (and who therefore appears to enjoy extra-mural luxuries more than the disciplined life of his order); and the equally worldly and mercenary Friar. The third estate is represented by a greater variety of figures, rich, middling, and poor, beginning with a shomewhat shifty Merchant, a bookish Oxford Clerk, a Sergeant of the Law, and a Franklin. We move downwards socially to the urban guildsmen (Haberdasher, Carpenter, Weaver, Dyer, and Tapicer), to the skilled tradesmen (Cook, Shipman, Doctor of Physic), and to a well-off widow with a trade of her own (the Wife of Bath). Chaucer relegates his Parson, his Ploughman, his Manciple, and his reprobates (the Reeve, the Miller, the Summoner, and the Pardoner) to the end of his troupe (though he also modestly includes himself, a high-ranking royal official, at the end of the list). It is with this last group that he seems to want to surprise his readers by contrasting paragons of virtue with those whose very calling prompts periodic falls from grace (the Reeve strikes fear into his master's tenants while feathering his own nest; the Miller steals corn and overcharges his clients; the lecherous Summoner makes a parade of his limited learning; and the Pardoner trades profitably in patently false relics). Where the Manciple's native wit and acquired administrative skills see to render him worthy of better things, Chaucer's stress on the due humility of the Parson and the Ploughman proclaims their exemplary fitness for their modest but essential social role. If the Knight at the top of the social scale had seemed 'a worthy man', loyal to his knightly vows and embodying the spirit of chivalry, so, in their respective callings, the Parson stands for the true mission of the Church to the poor, and the Ploughman for the blessedness of holy poverty. When Chaucer describes the two as brothers, it is likely that he sees their fraternity as rooted in Christian meekness and closeness to God. Both, in the manner of Langland's Piers, act out the gospel: the Parson by offering a 'noble ensample to his sheep' and the Ploughman by 'lyvynge in pees and parfit charitee'. 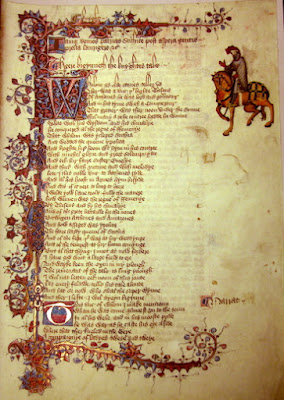 Whoso shal telle a tale after a man,
He moot reherce as ny as evere he kan
Everich a word, if it be in his charge,
Al speke he never so rudeliche and large,
Or ellis he moot telle his tale untrewe,
Or feyne thyng, or fynde wordes newe.
He may nat spare, althogh he were his brother;
He moot as wel seye o [one] word as another.
Crist spak hymself ful brode plainly in hooly writ,
And wel ye woot no vileynye is it,
Eek Plato seith, whoso that kan hym rede,
The wordes moote be cosyn [akin] to the dede.
Also I prey yow to foryeve [forgive] it me.
Al have I nat set folk in hir degree
Heere in this tale, as that they sholde stonde.
My wit is short, ye may wel understonde.

Here is the pretence of modesty and incompetence, but here too is the insistence on frankness and proper representation, albeit justified with reference to Christ and to Plato (beyond whose authority few medieval readers would feel the need to refer), Chaucer neutralizes and diminishes himself as a narrator in order that his narrative representation of others' words and narratives might shine with a greater 'truth' to God's nature. In a way that his theologically minded contemporaries might readily understand, he is posing as the servant of the servants of Christ, having become, like St Paul before him, 'all things to all men' ('omnibus factus sum omnia'). The Christian poet of The Canterbury Tales, one variously influenced by both Boccaccio and Dante, endeavours to show us a broad spectrum of sinful humanity on an earthly journey, a journey which original readers would readily have recognized as a prevision of, and a preparation for, a heavenly one. 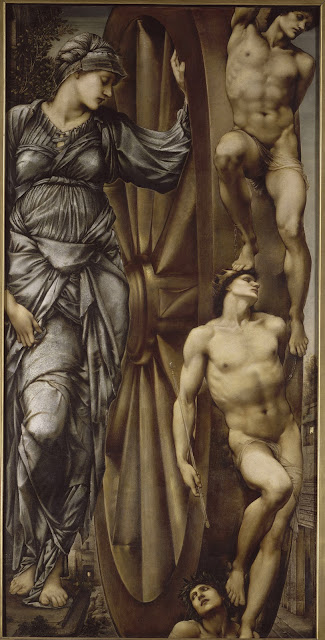 'And Troilus, my clothes everychon
Shul blake ben in tokenyng, herte swete,
That I am as out of this world agon,
That wont was yow to setten in quiete;
And of myn ordre, ay til deth me mete,
The observance evere, in youre absence,
Shal sorwe ben, compleynt and abstinence.

Her ambiguously optimistic interpretation of the Orpheus/Eurydice story may well lead us to perceive how uneasily tragic are the undertones of her avowal. For Criseyde, lovers  symbolically pass through Hades to reach Elysium, or, in medieval Christian terms, they suffer penitentially in Purgatory as a preparation for Paradise. Criseyde's descent to Hades/Purgatory, a place where the only certainty is uncertainty, will be metaphoric. Separated from Troilus, a new element of ambiguity enters the narrative. The narrator himself purports to consult his source to find an exaggeratedly clear statement of her treachery. Criseyde, however, is painfully conscious that hers is indeed a world-without-end decision, one which will render her infamous in subsequent human annals:


But trewely, the storie telleth us,
Ther made nevere woman moore wo
Than she, whan that she falsed Troilus.
She seyde, 'Allas! for now is clene ago [gone]
My name of trouthe in love, for everemo!
For I have falsed oon the gentileste
That evere was, and oon the worthieste!
'Alas! of me, unto the worldes ende,
Shal neyther ben ywriten nor ysonge
No good word, for thise bokes wol me shende [reproach].
O, rolled shal I ben on many a tonge!
Thorughout the world my belle shal be ronge!
And wommen moost wol haten me of alle.
Allas, that swich a cas me sholde falle!'

Faced with such agonized self-awareness, the narrator retreats into pity, reluctant to blame her more than his historic predecessors have done but willingly to concede that her penitence impresses him ('For she so sory was for hire untrouthe, / Iwis, I wolde excuse hire yet for routhe [pity]').
If the narrator of Troilus and Criseyde is neither the gentle incompent 'Chaucer' of The Canterbury Tales nor the incomprehending innocent of the dream-poems, he nevertheless shares something of their generous susceptibility. Like them, he suggests a tense, shifting relationship between the poet and his persona, and consequently between the poet and his poem. He moves around his characters, allowing them to express their respective points of view, at times ruminating on the iron laws of fate and divinely imposed predestination, at others both suggesting and withdrawing from judgement. He allows the story a certain autonomy while varying his commentary by deferring both to his sources and to his audience. In Troilus and Criseyde at least, he seems to insist that history is steady and needs to be retold, while allowing that his story is reshaped in the very act of retelling it. Essentially, he remains ambivalent, or, perhaps, given his evident sympathy with women and his admiration for what he seems to have identified as feminine generosity of spirit, he assumes a deliberate androgyny. He is certainly the least egocentric of poets. Although Chaucer is in every sense a writer of his time, he was also the first poet in English both to display and to make a particular narrative issue of the quality which John Keats later so memorably defined as 'negative capability'. 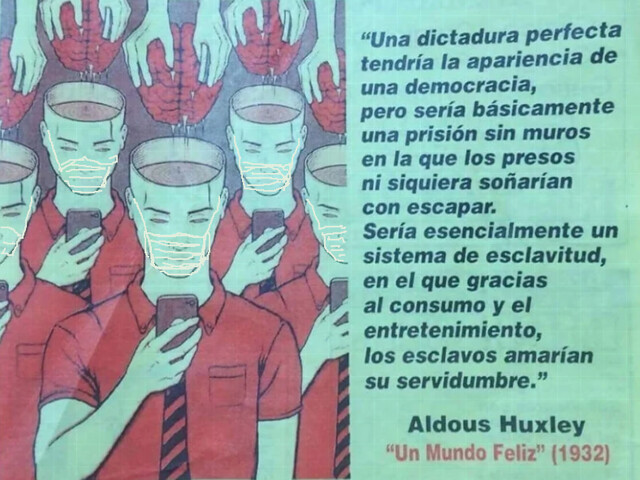