Charles Darwin was not much concerned with evolutionary cosmogony, unlike his grandfather Erasmus.  In Eramus Darwin's The Economy of Vegetation we find an eighteenth-century imaginative equivalent of the Big Bang, a great narrative of creation in which the role given to God is as mythical as that of the sylphs and fairies and nymphs of primeval fire—only a "sublime allegory". The function of the fairy element in Darwin's poems, often ridiculed by literary historians and scientists alike, is clear enough when seen in this context. It is a a way of including the Christian account of the creation as just one more element of the mythical apparatus, no more true from a scientific viewpoint than the sylphs and the nymphs. 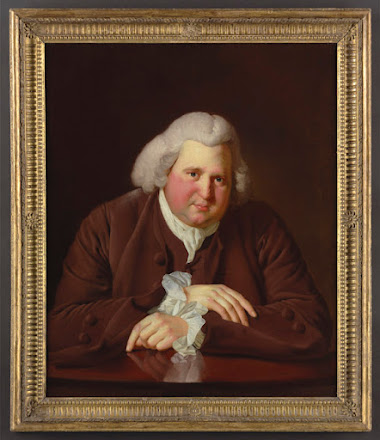 Both the verse and the notes come from the first part of Erasmus Darwin's The Botanic Garden (1788, online at Project Gutenberg). The theory of biological evolution is also sketched out in the notes, following Buffon's ideas.

From canto I of  Poem I, The Economy of Vegetation:     I. "NYMPHS OF PRIMEVAL FIRE! YOUR vestal train
Hung with gold-tresses o'er the vast inane,
Pierced with your silver shafts the throne of Night,
100 And charm'd young Nature's opening eyes with light;
When LOVE DIVINE, with brooding wings unfurl'd,
Call'd from the rude abyss the living world.
"—LET THERE BE LIGHT!" proclaim'd the ALMIGHTY LORD,
Astonish'd Chaos heard the potent word;—
105 Through all his realms the kindling Ether runs,
And the mass starts into a million suns;
Earths round each sun with quick explosions burst,
And second planets issue from the first;
Bend, as they journey with projectile force,
110 In bright ellipses their reluctant course;
Orbs wheel in orbs, round centres centres roll,
And form, self-balanced, one revolving Whole.
—Onward they move amid their bright abode,
Space without bound, THE BOSOM OF THEIR GOD!

[Nymphs of primeval fire. l. 97. The fluid matter of heat is perhaps the most extensive element in nature; all other bodies are immersed in it, and are preserved in their present state of solidity or fluidity by the attraction of their particles to the matter of heat. Since all known bodies are contractible into less space by depriving them of some portion of their heat, and as there is no part of nature totally deprived of heat, there is reason to believe that the particles of bodies do not touch, but are held towards each other by their self- attraction, and recede from each other by their attraction to the mass of heat which surrounds them; and thus exist in an equilibrium between these two powers. If more of the matter of heat be applied to them, they recede further from each other, and become fluid; if still more be applied, they take an aerial form, and are termed Gasses by the modern chemists. Thus when water is heated to a certain degree, it would instantly assume the form of steam, but for the pressure of the atmosphere, which prevents this change from taking place so easily; the same is true of quicksilver, diamonds, and of perhaps all other bodies in Nature; they would first become fluid, and then aeriform by appropriated degrees of heat. On the contrary, this elastic matter of heat, termed Calorique in the new nomenclature of the French Academicians, is liable to become consolidated itself in its combinations with some bodies, as perhaps in nitre, and probably in combustible bodies as sulphur and charcoal. See note on l. 232, of this Canto. Modern philosophers have not yet been able to decide whether light and heat be different fluids, or modifications of the same fluid, as they have many properties in common. See note on l. 462 of this Canto.]

[When Love Divine. l. 101. From having observed the gradual evolution of the young animal or plant from its egg or seed; and afterwards its successive advances to its more perfect state, or maturity; philosophers of all ages seem to have imagined, that the great world itself had likewise its infancy and its gradual progress to maturity; this seems to have given origin to the very antient and sublime allegory of Eros, or Divine Love, producing the world from the egg of Night, as it floated in Chaos. See l. 419. of this Canto.

The external crust of the earth, as far as it has been exposed to our view in mines or mountains, countenances this opinion; since these have evidently for the most part had their origin from the shells of fishes, the decomposition of vegetables, and the recrements of other animal materials, and must therefore have been formed progressively from small beginnings. There are likewise some apparently useless or incomplete appendages to plants and animals, which seem to shew they have gradually undergone changes from their original state; such as the stamens without anthers, and styles without stigmas of several plants, as mentioned in the note on Curcuma, Vol. II. of this work. Such is the halteres, or rudiments of wings of some two-winged insects; and the paps of male animals; thus swine have four toes, but two of them are imperfectly formed, and not long enough for use. The allantoide in some animals seems to have become extinct; in others is above tenfold the size, which would seem necessary for its purpose. Buffon du Cochon. T. 6. p. 257. Perhaps all the supposed monstrous births of Nature are remains of their habits of production in their former less perfect state, or attempts towards greater perfection.]

[Through all his realms. l. 105. Mr. Herschel has given a very sublime and curious account of the construction of the heavens with his discovery of some thousand nebulae, or clouds of stars; many of which are much larger collections of stars, than all those put together, which are visible to our naked eyes, added to those which form the galaxy, or milky zone, which surrounds us. He observes that in the vicinity of these clusters of stars there are proportionally fewer stars than in other parts of the heavens; and hence he concludes, that they have attracted each other, on the supposition that infinite space was at first equally sprinkled with them; as if it had at the beginning been filled with a fluid mass, which had coagulated. Mr. Herschel has further shewn, that the whole sidereal system is gradually moving round some centre, which may be an opake mass of matter, Philos. Trans. V. LXXIV. If all these Suns are moving round some great central body; they must have had a projectile force, as well as a centripetal one; and may thence be supposed to have emerged or been projected from the material, where they were produced. We can have no idea of a natural power, which could project a Sun out of Chaos, except by comparing it to the explosions or earthquakes owing to the sudden evolution of aqueous or of other more elastic vapours; of the power of which under immeasurable degrees of heat, and compression, we are yet ignorant.

It may be objected, that if the stars had been projected from a Chaos by explosions, that they must have returned again into it from the known laws of gravitation; this however would not happen, if the whole of Chaos, like grains of gunpowder, was exploded at the same time, and dispersed through infinite space at once, or in quick succession, in every possible direction. The same objection may be stated against the possibility of the planets having been thrown from the sun by explosions; and the secondary planets from the primary ones; which will be spoken of more at large in the second Canto, but if the planets are supposed to have been projected from their suns, and the secondary from the primary ones, at the beginning of their course; they might be so influenced or diverted by the attractions of the suns, or sun, in their vicinity, as to prevent their tendency to return into the body, from which they were projected.